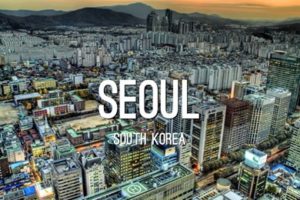 Seoul is the capital of South Korea (Republic of Korea) and its biggest city. The estimated population within its city limits is 10.29 million people, but factor in its surrounding areas and that number jumps to 25.6 million, making it the second-largest metropolitan area in the world. With a workforce that large driving its economy, it’s no wonder Seoul is now the 4th most economically powerful city, behind only Tokyo, New York City, and Los Angeles (as measured by GDP).

South Korea has been making headlines in recent years in the tech, automotive, and entertainment sectors. Korean brands like Samsung and Hyundai are globally recognized brands. People worldwide watch K-dramas and listen to K-pop. Myeongdong has become a hotbed for cosmetics, South Korea is booming, and at the center of all that excitement, is Seoul.

Like Japan, South Korea has four distinct seasons — Spring, Summer, Fall, and Winter. The most popular times to visit Seoul are during the Spring (March-May) and Fall (Mid-September – Early November) months when the weather is ideal and the landscape is at its most striking. Both seasons are characterized by a dramatic change in color – Spring for its cherry blossom pinks and whites, and Autumn for its fiery reds, oranges, and yellows.

Almost all international flights land at Incheon International Airport. There are several ways to get to downtown Seoul from Incheon.

This is the fastest way to get to the city from the airport. It runs like clockwork and will get you into Seoul Station in exactly 43 minutes. The trains are comfortable with free wifi onboard. A one-way ticket costs KRW 9,000 for adults, but you can save on the fare if you purchase AREX tickets in advance through Klook (just KRW 6,500). Follow this link for an AREX timetable.

This is the second-fastest way to get into Seoul from Incheon. It will get you to Seoul Station in about 58 minutes and costs just KRW 4,150 each way (with a T-money Card). Trains run from 5:23 AM till 11:40 PM.

A one-way bus ticket costs KRW 9,000 and takes longer than the subway (around 80 minutes), so it is better taking it only if you’re arriving at Incheon during off-hours. Late-night airport buses to Seoul Station run from 12MN-4: 40 AM, while buses to Gangnam Express Bus Terminal operate from 11:40PM-4: 20 AM. Detailed inquiries on bus routes and bus stops can be made at the Airport Information Desk on the 1st floor.

Going by taxi is the most convenient way, but it’s also the most expensive. A taxi will get you into the city in about an hour and will cost you around KRW 55,000-75,000.

You can also check out this link for more information on how to get to Seoul from Incheon.

Where to Exchange Currency?

The unit of currency in Seoul is the Korean Won (KRW). Myeongdong is the best place to exchange your currency. There are plenty of money changers in the area and they’re known to give the best rates in the city.

It is better to change a small amount at the airport, no more than USD 100, just to get you into the city. You can then change the rest in Myeongdong.

A better option might be to just withdraw KRW from an ATM. The rates are competitive, some say even better. Just be sure to advise your bank that you’ll be using your ATM card overseas so you don’t run into any problems.

In South Korea, the power plugs and sockets are of type C and F. The standard voltage is 220 V and the standard frequency is 60 Hz.

The frequency in South Korea (60 Hz) differs from the frequency in India (50 Hz). It is not advised to use your appliances, but you could (at your own risk) try for a short time. Be especially careful with moving, rotating and time related appliances like clocks, shavers, and electric fan heaters.

To be sure, check the label on the appliance. Some appliances never need a converter. If the label states 'INPUT: 100-240V, 50/60 Hz' the appliance can be used in all countries in the world. This is common for chargers of tablets/laptops, photo cameras, cell phones, toothbrushes, etc.