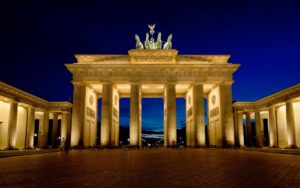 The German capital offers the best national and international travel connections, numerous modern hotels, and some truly special venues. In addition, the city offers great value for money. In fact, the city is Germany’s biggest and most popular meeting destination. Berlin’s mayor calls the city “poor but sexy”. This description is reflected in every way by low hotel prices which are contrasted by an enormously rich cultural program. Berlin is far more than just a meeting place for leading people from science, business, and politics. The German capital ranks as one of the most visited metropolises in Europe. Located at the heart of Europe it represents a connection between East and West.

Berlin offers its visitors a uniquely varied cultural program, one-of-a-kind historical landmarks and all sorts of entertainment. The city has a long tradition as a theatre metropolis and is justly proud that it can present such a diverse range of productions today. It is as well a city of museums. Germany’s largest cultural investment project, the Berlin Museum Island, was completed in 2010. The five museums on Museum Island were added to the World Cultural Heritage List. From a quick snack to dinner at a gourmet restaurant, international cuisine, theme restaurants, beer gardens, and regional cooking – Berlin’s 7,000 restaurants and eateries cater to every taste, any occasion, any time of the day or night. Berlin’s nightlife is fast-paced and has something for everyone.

Berlin is located in the Central European Time zone MEZ. Germany belongs to a temperate zone, which requires a wardrobe as flexible as possible. In summer, the temperature rises above 27°C/80F, but deviations are quite common.

The Euro “€” is the official currency in Germany. You can change money at banks, post offices and currency exchanges in airports or train stations. Common credit cards are American Express, MasterCard and Visa. Diners Club is rarely used but is accepted by major hotels, petrol stations or large shops. Otherwise, cash will be accepted.

The voltage in Germany is 220V. The electrical sockets may be different and you might need to take an adaptor plug with you to use your electronic devices. Adapters are widely available in electronics stores.

In Germany, the Value-added tax (VAT) rate of 19% is added to the net price. On certain products and services, such as books, staple foods (except soft drinks and spirits), newspapers, flowers and public transport tickets the reduced VAT rate of 7% is applied.

Berlin has the most liberal opening times in Germany. Almost all the shops in the large shopping streets are usually open from 10:00 AM to 8:00 PM. Apart from a few exceptions (airports and railway stations), all shops are closed on Sundays. Banks are usually open between 10:00 AM and 4:00 PM.

Berlin has over 650 hotspots offering free public wifi to more than 2.8 million users every month.

More information can be found here

Berlin’s most famous landmark is over 200 years old. Symbol of a divided Berlin until 1989, today it is the national symbol of unity.

One of the most extraordinary museum complexes in all of Europe, it contains five world-renowned museums: Pergamonmuseum, Bode-Museum, Neues Museum, Alte Nationalgalerie and Altes Museum.

This former market square was named after Tsar Alexander I in 1805. Half a million people transfer here every day. With numerous Underground, Tram and S-Bahn lines crossing here, Alexanderplatz is the place to be when looking to experience Berlin’s buzzing Mitte district.

Guide to Top Attractions in Berlin